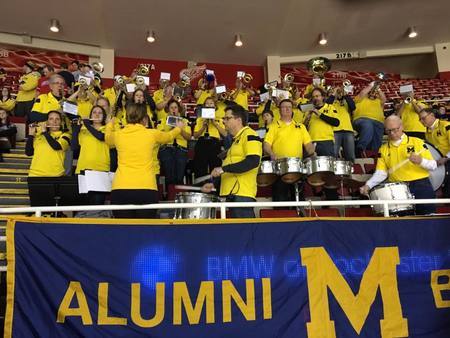 We would like to invite members of the Band Alumni Association to be part of the Michigan Alumni Pep Band for the 2019-2020 Season. The Michigan Athletic Bands is pleased to have your support with Basketball and Hockey games this year.

*Only if Michigan Football is in the Big Ten Championship game

Please note that specific meeting times and locations will be announced at the rehearsals with reminders forwarded by email prior to the event. In general, plan to be at the game venue no later than 45 minutes prior to the start of the game.

Nathan Werme and Ryan Schrauben are the Co-Directors. The Alumni Pep Band, established in 1992, has been well received by the teams and fans, and we look forward to returning with the thrilling Michigan sounds that our alumni can produce.

Rehearsals will be held at Revelli Hall and are an hour and a half long. With our limited rehearsal time, members must attend rehearsals as they are our only opportunity to polish the old favorites and add new music to our repertoire. Due to space restrictions at some venues, we may have to limit the number of players. Attendance at rehearsals will be the primary factor in determining which players can perform.

If you are a current member of the Band Alumni Association and would like to be part of the Michigan Alumni Pep Band for the 2018-2019 season, please contact Pete Dalton at loudtuba@umich.edu or call 734-604-8086. 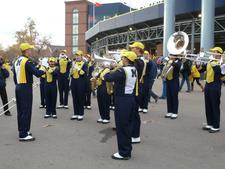 Nathan Werme began his love of the Michigan Marching Band program as a freshman trombone player in 2009. He was a four year member of the marching band and Campus/University Band, and he was a three year member of the Hockey Band. During his time in the MMB, he was a trombone rank leader and was the conductor of the Fanfare Band in his senior year. After graduating, he couldn't stay away for the MMB for long, as Dr. Pasquale would often ask Nathan to conduct the Hockey Band when he was out of town. Even as a "Fossil," Nathan still supports the band at every home game and loves getting back into step for the yearly "Blast from the Past." When not cheering on the MMB, Nathan works as a transmission calibration engineer at Ford Motor Company in Livonia, MI. 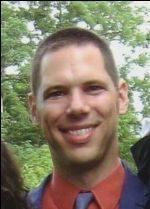 Ryan earned his bachelor's degree in trumpet performance, graduating in 2003. During his time in school, he participated in the Michigan Marching Band as a member of the Trumpet and Cymbal sections, and played Bass Drum and Cymbals in Michigan Hockey Band as well.
He currently resides in Dexter, MI along with his wife, Megan, and two children.