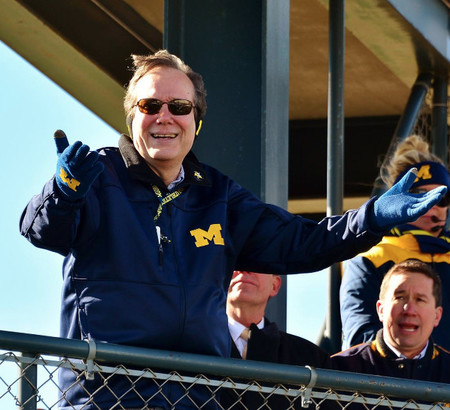 April 4th, 2017, the U of M Band Alumni Association lost one of our own. Band alumnus, arranger, composer, lifelong supporter, and dear friend, John Stout, passed peacefully at his home after a long battle with cancer.

John was recently named a recipient of UMBAA's "Lifetime Achievement Award" for his incredible contributions not only to the Michigan Bands, but the world of bands and music in general.

John's work and presence helped to shape the identity and sound of the Michigan Bands for more than 4 decades, and his legacy will continue to inspire us for years to come. He will be greatly missed.

We extend out deepest condolences to Gail and the entire Stout Family.

John's obituary can be found here

A Celebration of Life and Legacy

On April 18th, in the Jack Roth Club at Michigan Stadium, the Michigan Band family came together to celebrate and remember John. What a party! Hundreds of Michigan Band students and alumni from all era's were there along with hundreds more of John's friends and colleagues.

The event featured a number of speakers including:

The highlight of the day was a combined student and alumni band of over 200 performing all the Michigan Band traditional tunes on the field in Michigan Stadium. What a fitting tribute! Check out the sights and sounds below.

The world is a less fun place without John Stout in it. I am eternally grateful for having known him and experienced his greatness. But at the same time I am profoundly sad that his life has been cut short and we have been somehow robbed of what more John would have done to make our world a better place.

Enough for being sad. I will remember John for his humor, his genuine interest in others, and his love of family, country, and all things Michigan. When I was a member of the MMB, performing his arrangements was a joy beyond words, especially those show closers with the signature dramatic “Stout ending”. The list of favorite tunes is lengthy, though I was particularly fond of “Russian Christmas Music”, “Somewhere”, “Fanfare for Rocky”, and perhaps the quintessential tune of my era, “In The Stone”.

John’s passion for Michigan Football was unmatched, the team arguably didn’t have a bigger fan. He knew the game very well and had a particular fondness for well executed Special Teams play, because a made/missed kick or big kick return could be the difference in a big game.

It’s hard to believe that John and I were friends for almost 40 years. And since John was a part of Michigan Band history for 40 years, I think it’s fitting that I was first introduced to him by another big part of Michigan Band history, Albert Ahronheim. Albert served as Drum Major of the MMB for the 1972-74 seasons and began arranging for the band during that time. His arrangements include “Let’s Go Blue,” “Hoover Street Rag,” “Calyptors,” and more. Then, just as Albert was preparing to leave Ann Arbor and further his music career in New York, he introduced me to this tall, lanky, long-haired, sorta geeky School of Music student named John Stout. He told me that John was going to “do a few arrangements for the MMB.” Yeah, I guess he did! Just a few! Starting with the epic “Star Wars” show of 1977, John defined the sound of the MMB for the next four decades.

Most of us know about John’s musical talents, his success in business, his philanthropy, and his lovely family. But what was it like to be his friend? To me, John’s most prominent quality was his impish sense of humor. Even though he lived until the age of 60 and was successful in so many fields, to me he was always that geeky kid with the non-stop sense of the silly.

John dressed as Darth Vader for the 1977 Star Wars show

For several years we spent lots of time together. I was with him and Gail the day they got engaged. I sang at their wedding. I remember the births of Michael and Lauren. The closeness became more difficult when I moved to Chicago in 1986. And yet, for the next 30 years, it was as if we hadn’t missed a day together. I would drive in from Chicago and be standing on the sidelines at Elbel Field, concentrating on the show being rehearsed when a certain someone would sneak up behind me and make the silliest (and sometimes un-repeatable) comment about life, the band, music, football...whatever. Whether he was mimicking certain MMB directors, or quoting his favorite “Truly Tasteless Jokes,” (remember those?) John’s bright, silly, absurdist take on the world always brightened my day. Yes, he was disguised as an adult—short hair, business concerns, being a husband and father—but that talented, funny kid I met in 1977 was still there too. And that is how I will always remember him, with a smile. 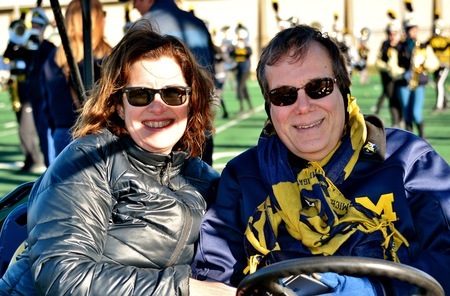